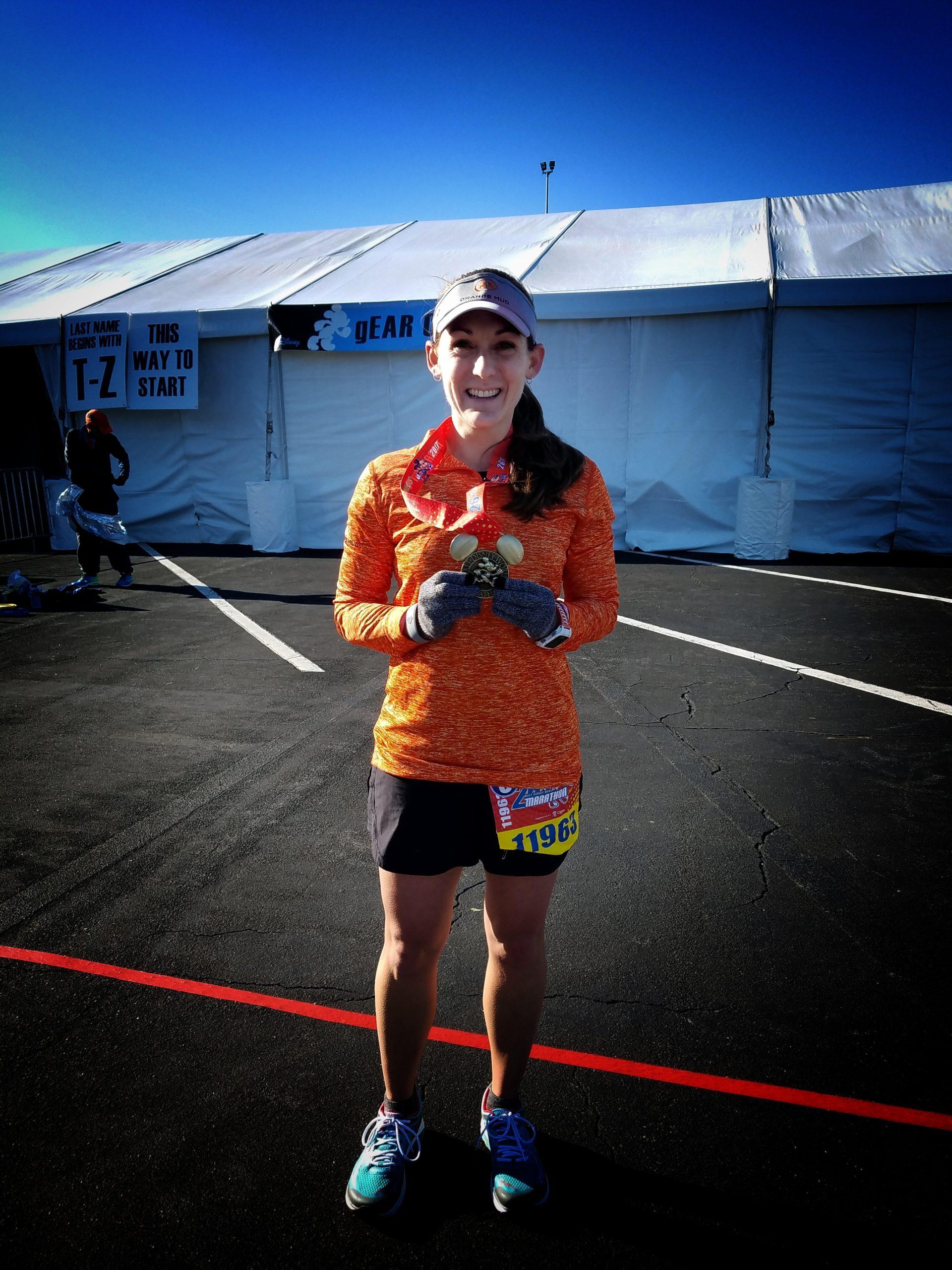 24 hours earlier, hubby and I had run an awesome 50k in the woods of central FL. We then hit a Goodwill store for warm clothes (because we had neglected to bring them, because we were going to FLORIDA and everyone knows there is no such thing as winter there.  Except, when there is) and gorged on Chinese takeout. I then thought my legs hadn’t had enough fun, so I convinced hubby to go with me to Walt Disney Animal Kingdom so I could ride Expedition: Everest (AMAZING ride!) and explore the park before it was time to go back to the hotel and set our alarms for 0’dark hundred, so we could catch the shuttle for our 0530am race start.

Which brings us back to a 0300 wake-up, our third in as many days.  Don’t most people sleep in and relax on their vacations?  Apparently we didn’t get that memo. A quick check of the weather showed it was cold (WTH Florida?) and windy.  Right. I put the singlet away and pulled out the only long sleeve running top I had brought, my Orange Mud quarter zip technical pullover (and it was packed as a last minute after thought. Thank God my un-organized self knew what she was doing) and layered it over a tech T. Shorts on the bottom, and all covered with our Goodwill finds; which ended up being a Florida Gators hoodie (I had a moment of panic, worrying if I was wearing this in enemy territory. I was later told I was pretty much in neutral land so I was good. Whew) and pajama bottoms. My Topo Ultraflys, my absolute favorite road shoe, completed the race day kit.

We were out the door at 0340, and with a quick hobble across the parking lot, we came to the waiting shuttle that would take us to the start. Tip: if you ever do a Disney race, staying on the Resort property has the advantage of free shuttle service to and from the event.  This was a wonderful way to eliminate some stress on race morning. I munched on an overpriced bagel I had bought at the hotel canteen the night before. I was cold, I was sore, and I was tired. But a marathon awaited!

Hubby and I made a quick trip to the bag drop tents, and then on to the obligatory revolving porta-john visits for a good 20 mins, before we both shuffled to our corrals.  Thankfully, a lot of folks were out doing the Dopey challenge that weekend, so we were not alone with the hitch in our giddy-ups. We fit right in!  And honestly, everyone was so cold, I don’t think most people even noticed.  I chatted with a few nice folks in the corral prior to the gun going off. I think we were all trying to distract ourselves from the cold.  I had decided I would take the pajama bottoms off just before the start, but opted to keep the hoodie on for a bit longer. I just couldn’t part with it yet.

Then, with a countdown and a flash of fireworks, we were off!

My goals, based on my soreness and my effort the previous day, were as follows: First, have fun and smile. Even if it’s really a grimace, YOU WILL MAKE IT LOOK LIKE A SMILE dammit. High five children. Dance at drum lines. Then: C goal – 5 hours. B goal – 4:30 hours. A goal – 4 hours.  And don’t forget to SMILE!

I won’t go into too much course details, but in a nutshell we started the race leaving Epcot and heading towards the Magical Kingdom via a highway. At about mile 3 my shoe became untied (that’s a first for me in a race) so when I stopped to retie it, I decided it was time to ditch the hoodie. Around mile 5 we entered the “Kingdom” and I am not going to lie, when we turned the right onto Main Street and saw the castle lit up like a beacon with lights, with lines of people cheering us on, I teared up. Happens at some point in every race. Just normally near the end. 😉

We proceeded to do a quick loop around parts of the park before exiting and running along some back lot roads. I made a quick stop at the porta-johns around mile 7, and at mile 9, connected with a gentleman who was out from CA (holla!) and actually not far from where I grew up. Small world indeed! We shortly parted ways, and later I would learn that he and I follow each other on Instagram. What are the odds amongst the giant crowds that day?

In any case, before we knew it, we were in Animal Kingdom and roughly the half way point, then on to ESPN Wide World of Sports, where the drum line dancing commenced! (Also, there was an emergency porta-john stop here at mile 19. FFS, I never, ever, EVER use porta-johns during roads races. I guess I really have turned into an ultra runner. Ha! But that 2 min stop was a blessing. Never underestimate the power of a porta-john on a race course just when you need it!)

Feeling renewed, it was off Hollywood Studios and then – THANK GOD – back to the Motherland that was Epcot via the Boardwalk. I found this to be the prettiest part of the race. Maybe it was because we had less than 2 miles to go. Maybe it was because this area really is very pretty. Or maybe it was the full sized bag of crunchy M&Ms a bystander gave me. You sir, are a hero.

And then it was the longest mile ever and I was at the finish! Donald and Goofy and Mickey were there to cheer me on! Ok, they were there for everyone else, too, but I distinctly remember seeing Donald making eye contact with me as he gave me a big thumbs up. That’s right, we had a moment.

Annnnd…I actually pulled a sub-4 hour marathon (barely!) out, the day after a 32 mile trail race. What what?!  My quads had already told me throughout the race that we’d have words later. Thanks for taking one for the team, guys!

When all was said and done, we took the shuttle back to the hotel, showered and then headed out to Epcot for a delightful (albeit overpriced) meal, and then on to the Magical Kingdom (with our medals, of course!) for a few hours of rides and fun. By then it was getting cold and my internal thermostat was off, so we had to stop and buy beanies and gloves. In FLORIDA.  Oh, the shame.

So there you have it. Our successful and wildly fun January Double Header. Would I do it again? You bet!  Pairing both races back-to-back made for a fun challenge and a big confidence booster on how my fitness and training have been coming along.  The weekend was a crazy whirlwind, but who needs to relax on vacation anyways?!

And then…back to the tundra we went.  Goodbye Florida!  Thanks for a great weekend!

My Dirt Road Therapy Session (or dealing with a tough week)